African Greys are the most popular parrots in the world. They are very intelligent and can learn to speak so well that some people think they are as intelligent as a toddler. 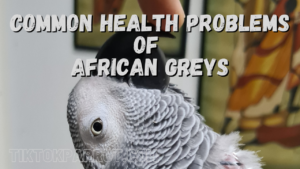 The African grey has an average life span of 50-60 years and even up to 80 years. They live in captivity for about 50% longer than other pet birds of similar size because they have evolved to survive in harsh conditions such as drought or cold weather.

African Greys are one of the most popular pet birds in the world. They are known for their intelligence, sociability, and beauty. But like any other pet bird, they can also suffer from several health problems.

There are many reasons for this, including exposure to poor quality food, exposure to too much sun or heat, and improper care by their owners.
African Greys are more prone to some health problems than other types of parrots. They are also more sensitive to some environmental factors.

Digestive problems in African Grey Parrots
One reason that African Greys often get sick is that they have a very sensitive digestive tract. This means that they can’t digest many foods that other birds can eat without any issue at all.

For example, African Greys cannot eat all types of nuts or seeds because these types of food will cause them to develop fatal blockages in their digestive tract. So only feed those nuts and seeds which are safe for them and easy to digest.

Please make sure you always do good research before feeding your bird, there are some nuts and fruits which can kill your bird. I made the biggest mistake of my life and fed avocado to my lovely bird and he died 🙁

Kidney problems in African Grey Parrots
African Grey parrots have a high risk of developing kidney problems. This is due to their diet, which is mainly made up of seeds and some fruits and vegetables. They need a more balanced diet with more protein, vitamins, minerals, and water.

Feather plucking in African Grey Parrots
The most common health problem that African Greys can suffer from is feather picking disorder or also known as excessive grooming behavior. This is when your bird starts to pluck out its feathers and sometimes even peck at its skin to the point where it causes bleeding or open wounds.

Feather plucking disorder is also known as self-mutilation syndrome. This is when your bird starts to pluck out its feathers without any apparent reason and it usually happens when there has been a change in environment. You can read more about feather plucking and how the possibility to treat at home 🙂

Beak malformations are deformities in the shape of the beak. These deformities can cause a bird to have trouble feeding itself. The most common beak malformation is called overgrowth, which is when the upper and lower beaks grow at different rates.
There are many causes of these malformations, but it is usually due to a genetic mutation that causes cells to grow too quickly or too slowly.

Nutritional imbalance in African Grey Parrots
The most common cause of death is a nutritional imbalance, which occurs when they don’t get enough protein or fat in their diet. It’s also not uncommon for these birds to eat things like paint chips or lead paint from furniture or walls because they’re curious about new things and want to explore their environment.

African grey parrots need to eat a diet that is rich in vitamins, minerals, and protein to stay healthy. If they do not get enough of these nutrients, they can suffer from malnutrition and this can lead to imbalances in their body’s chemistry.

Preening feathers excessively problem in African Grey Parrots
Preening is a process in which the bird cleans and maintains its feathers. The bird needs to do this because it helps them maintain its feathers.
African grey parrots have been seen preening excessively, which can lead to feather plucking. Feather plucking can be caused by many different things such as stress, illness, or boredom.

Preening is a very important part of grooming for the African Gray parrots. The preening process helps them to keep their feathers in good condition and also keeps them warm.

The African Grey parrots will have to spend a lot of time preening their feathers if they are not groomed properly. This is because they will have to take care of any feather that has been damaged or broken in some way. And this can lead to excessive preening, which can be very problematic for the bird’s health and well-being.

Preening is a natural behavior for birds and it is also a way of keeping themselves clean. However, the side effects of preening feathers excessively can be very bad for the bird. It can lead to issues like feather plucking and self-mutilation, which are very serious problems that need to be addressed immediately.

Mites and lice are common parasites in birds. They can be found in all types of birds, but they are most commonly found on African grey parrots.

When mites and lice are present, the bird will have a loss of feathers and a greasy appearance. The bird may also have a dry skin condition, which is caused by the mite.
African Grey Parrots are not the only birds that suffer from mites and lice. Other birds like canaries, budgies, and cockatiels are also vulnerable to these parasites.

African Grey Parrots are especially vulnerable because they can’t groom themselves as well as other birds. They need help to remove any mites or lice that might be hiding in their feathers and skin.
A common misconception is that African Greys only get mites and lice from humans but this is not true. They can catch them from other birds or even the environment, so it’s important to keep your birdcage clean at all times.

Nail biting problems in African Grey parrots
Nail biting can be caused by boredom, anxiety, or other environmental factors. It may also happen as a result of chewing on things like perches or cage bars that have been damaged by the bird’s sharp teeth and nails. Some people think that nail biting is caused by nutritional deficiencies or mineral deficiencies in their diet.

The best way to prevent this from happening is to provide your African Grey parrot with plenty of toys and activities to keep them entertained throughout the day such as foraging toys, chewable branches, swings, ropes, balls, and more!

It is produced by the bacterium Chlamydophila psittaci. The bacteria are commonly found in bird droppings or dust particles in the air that can be inhaled into the lungs.

Psittacosis is a respiratory illness that mainly affects birds. It can also affect humans and other animals like cats. Psittacosis is found in tropical and subtropical regions of the world where there are large populations of birds, especially parrots and pigeons.

As I mentioned above Psittacosis can be transmitted to humans through inhalation of dust containing droppings from infected birds, handling an infected bird without gloves, eating undercooked meat of an animal that has died of psittacosis, or even drinking unpasteurized milk from a cow that has been exposed to psittacosis.

Obesity in African Grey Parrots
African grey parrots are highly intelligent and they have been studied extensively because of their ability to mimic human voices. They can also be taught to speak and use sign language, which makes them excellent pets for people with disabilities or people who don’t want a noisy bird.

However, this intelligence also means that they need a lot of stimulation from their owners to avoid boredom. African greys can become obese if they don’t get enough attention from humans and this can lead to health problems such as diabetes, heart disease, and even early death.

They can also be prone to obesity and have a high mortality rate.
This is because they do not know when to stop eating and will often eat until they become sick or die from overeating.

To prevent this, owners must provide their pets with a diet that is healthy for them but also allow them to indulge in their favorite foods on occasion.

Obesity in African Grey Parrots is a growing problem. It is not clear what causes this problem, but there are some theories about it. For example, some people think that an African Grey’s diet may be too high in fat or sugar content, while others think it could be because of their high activity level and low body weight.

My closing thoughts
African Greys are known to have a variety of health problems that can be prevented with regular vet visits. These birds tend to develop fatty liver disease, insulinoma, and other tumors. They are at risk for developing feather-picking disorder and self-mutilation syndrome as well.

African Greys need a lot of attention and care to maintain their health. They should be examined by a veterinarian every year or two to make sure they are healthy.

The most talkative TikTok Parrot.

Click here to read more about me, also you can shoot an email love@tiktokparrot.com