How Long Do African Grey Parrots Live in Captivity and Wild?

African greys are one of the most popular pet birds in the world. They are known for their ability to speak and imitate human voices. But how long do they live? In this blog I would cover that question for those who wanted to know the right answer.

First I would mention that lifespan varies depending on the care it receives, its genetics, and its environment.

What is the lifespan of an African grey parrot?

The African grey is one of the most popular pet birds because they have a long lifespan, are very intelligent, and can learn to speak words and phrases.

As we all know African Grey Parrots are one of the longest living birds in the world. They are also very intelligent and can learn how to speak human languages and perform tricks. They have a long lifespan because they can survive well in captivity and because they are not hunted for food or their feathers.

We can divide their lifespan into two components because their lifespan depends on their environment. They normally live longer life in captivity and live shorter life in the wild. I will explain that below, if you want to grab a coffee you can do that and then start reading below.

But their lifespan can vary depending on the quality of care they receive. My African grey parrot (TiktokParrot) was only seven years old when died because of my own mistake.

Usually, very few greys can live up to the full life in captivity, mostly they die earlier than reaching up to 30 years, it can be because of the owner’s mistakes, environmental change, or because of diseases.

African Grey’s lifespan in the wild

African Grey Parrots are one of the most popular types of parrots. They are intelligent, playful, and can talk. But these qualities also make them more vulnerable to humans than other species of birds.

They can die much earlier in the wild than they do in captivity, their lifespan can be as short as 8 years in the wild. The main reasons for this are that humans hunt them for their feathers or they get captured to be sold as pets.

According to the researchers, grays can die earlier in the wild due to a lack of food and predators as well.

Also you can check out my these important articles which might be helpful:–

Mental Illnesses in African Greys and How to Spot Them

The Importance of Animal Behavior and Aggression in Pet Care!

For more useful content about African Grey parrots, you can subscribe my site with your email to get notification upon publishing a new blog, the subscribe box you can see on the right side of this page. Also if you get an alert on your web browser while browsing my site, allow it and that will also give you an alert whenever I publish a new blog. 🙂 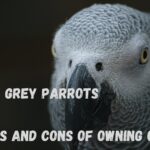 African Grey Parrots as Pets, The Pros and Cons of Owning One 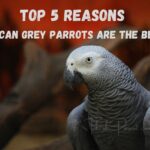 Top 5 Reasons Why African Grey Parrots Are The Best Pets 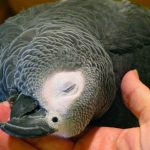 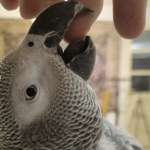 The Surprising Benefits of Owning an African Grey Parrot

A Closer Look at African Grey Parrots: Myth vs. Reality

The Secret Life of African Grey Parrots: What You Need to Know Before Owning One

African Grey Parrots: The Ultimate Guide to Care and Training

5 Reasons Why Your Parrot Needs Toys: The Importance of Mental & Physical Stimulation